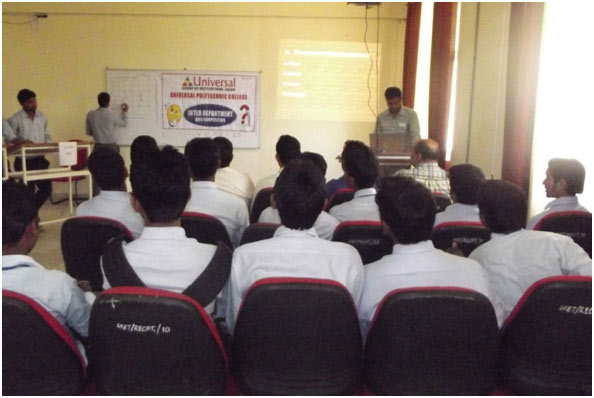 Mechanical & Civil Engineering Dept. has organized a Quiz Competition on 09th April 2015. Students of each department participated in this competition. There were a total of 6 teams (Mechanical, Civil, Electrical, Electronics, Computers, Applied Science) each consisting of two participants.

The Quiz comprised of three rounds:

Round one was G.K round consisting of four questions per team. It was a round in which the question which was not answered by the designated team was passed on to the next team. The correct answer was awarded 6 points and the team answering passed on question was also awarded with 6 points.

Round 2 consisted of technical questions pertaining to specific branches having five question per team. There is no pass on option. Correct answer was awarded 6 points. Also Penalty for wrong answer is 2 points

Round 3 consisted of 10 images which were answered by any team irrespective of turn. It was a buzzer round where anybody could answer the question and each question was awarded 10 points.

A total of 7 faculty members attended the quiz competition.At last Certificates to Winners was distributed by Mr. Mohit Gupta and he gave vote of thanks to all of us for participation.