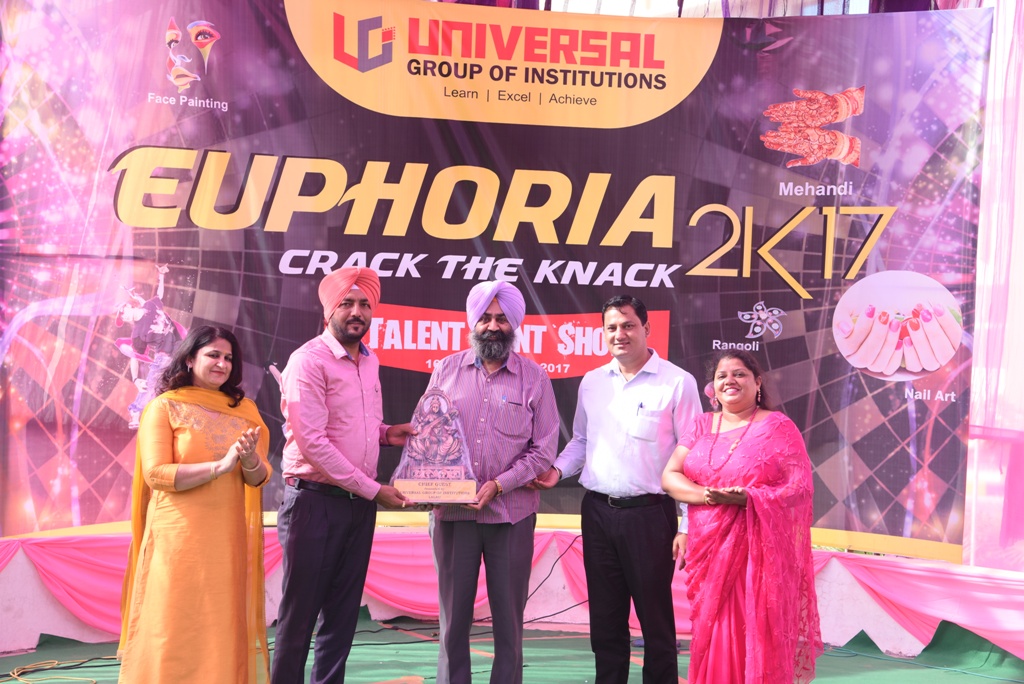 Universal College Of Education, (UGI) lalru organized talent euphoria to enhance the talent of students and to give them a competition environment in which they are able to learn more and more and possibly make their efforts to win the competition.  The event was a two day celebration of the talents of the UGI students i.e 16.oct.2017 and 17.oct.2017, Euphoria 2K17 began on 16.10.2017 with the events Expressions and Andaz-e-hunar, the  second day of the event euphoria  started at 9:30am with the most auspicious lamp lighting ceremony and beautiful saraswati vandana and it was inaugurated by worthy and inspirational words of Honourable chairman Dr. Gurpreet Singh at open air theatre. He said that the true essence of a winner is hardwork, one is not a born winner but his constant and consistent efforts make a human being a winner, to achieve the goals in life one must not lose concentration and efforts towards the goals, he further added “the essence of a happy and successful life is belief and hardwork.  Different events like solo/duet/group dance, swar and spectrum took place at open air theatre. Students from different colleges of UGI participated in each of the event and showed their talent’s . The chief guest for the event was Dr.Gurdeep Singh Kalyan, Director , DMRE(Punjab) who awarded all winners of respective events. Jamima from UIET was awarded as Ms. UGI and Prminder from ULC was awarded as Mr. UGI  . Furthermore, Archana from ULC was  Awarded as Ms Evening and Anmol from UIMT became Mr. Evening.Lastly on the basis of participation and position out of eight colleges of Universal Group Of institutions, UIET was rated the best performer in all the events and was honoured with the Running trophy by honorable Chairman, UGI and last year’s best performer and organizing college, Universal CollegeOf Education (UGI).