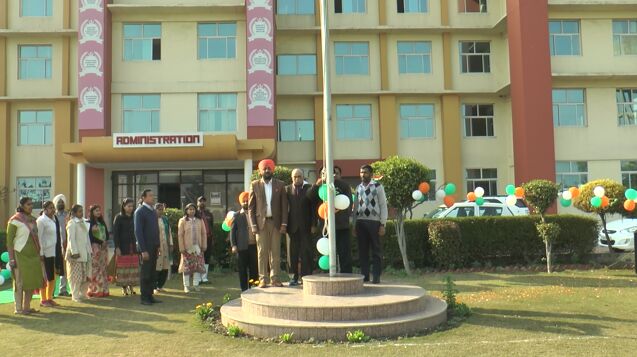 Being patriotic is synonymous to celebrating the important milestone of the country and Republic day is one such event .68 th Republic day was celebrated by the staff and students of Universal Group of Institution with patriotic fervor. Dr. Gurpreet Singh ,Chairman ,Universal Group of Institution welcomed the Chief Guest Sh. Ravinder Kishanji , an eminent Personality and renowned Lawyer and hoisted the National Flag followed by National Anthem. Hon. Chairman Sir spoke to the gathering about the Sanctity of the occasion and the role played by Constitutional makers with particular references. He threw light on various tasks to be undertaken by the present students who are the future citizens of the country.

Chairman Sir addressed the student should be brave and face all the challenges with courage so that they can perform their role as a good citizen. Cultural activities were held and the gathering was treated with some spectacular musical feats. A republic day parade held in college premises with beat of drum. The celebration concluded with the words of who honour in the respect of the people who made an Independent India Possible and this is time to pay Patriotic respect to our country.