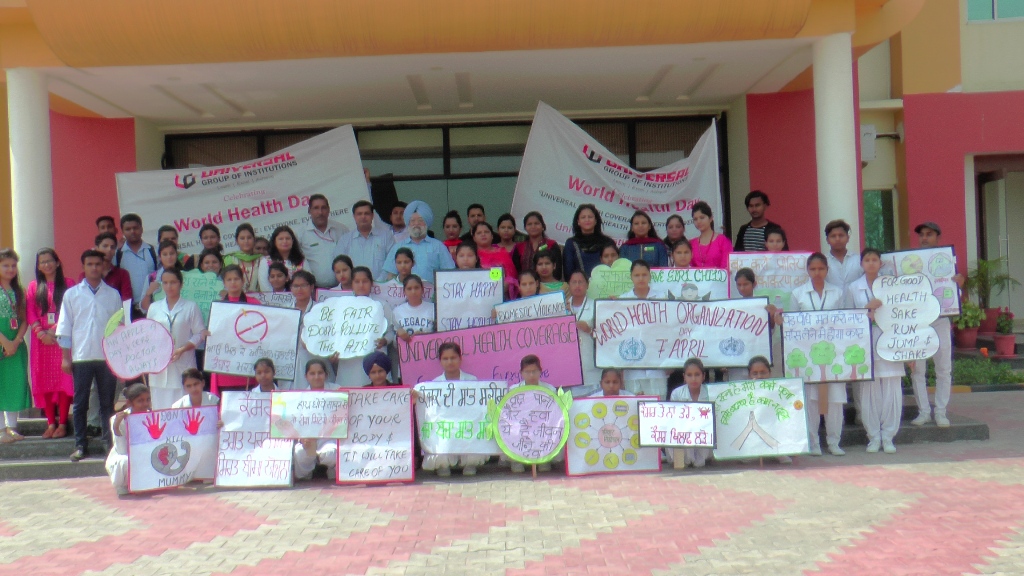 The World Health Organization (WHO) is a specialized agency of the United Nations that is concerned with international public health. It was established on 7 April 1948 headquartered in Geneva, Switzerland. The WHO is a member of the United Nations Development Group. Its predecessor, the Health Organization, was an agency of the League of Nations. The constitution of the World Health Organization had been signed by 61 countries on 7 April 1948, with the first meeting of the World Health Assembly finishing on 24 July 1948. The WHO is responsible for the World Health Report, the worldwide World Health Survey, and World Health Day. The Director-General of WHO is Tedros Adhanom who started his five-year term on 1 July 2017. World Health Day was celebrated by Universal Institute of Nursing under the guidance of Mrs Samta Rani (Principal), and all faculty members. WHO works for humanity &amp; Health .It covers all the communicable and non communicable diseases. It promotes research activities in medical field, provide funds and build status for health. Human rights, environment, endangered species and peace are all subject of universal concern to the people of the world.

Campus Director Mr. Sharanjeet Singh Dhillon Given Flags to Student Rally. Students Of UGI Given Awareness to different, different topics .Health education was given by students to the community people .The main motto of rally was to provide awareness to the community.Students rally was started From UGI to Ballopur Village than CHC lalru where students played a skit on tuberculosis and provide information to people on tuberculosis diseases, than students moved to Civil Hospital Derabassi. .students played a skit on Female Feticide .SMO Dr. Sangeeta Jain was Impressed by students activities. Awareness was given regarding Health Services and policies provided by WHO by the students.