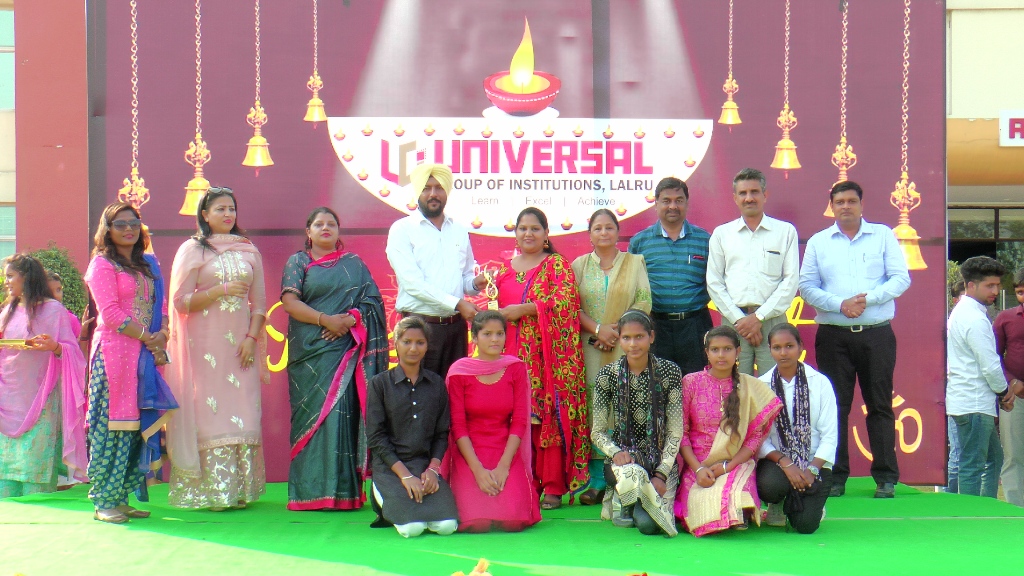 Universal group of Institutions, Lalru celebrated Deepawali on 2nd November, 2018 with organizing a "Deepawali fair" inside its alluring and beautiful green Campus. This Fair was inaugurated by Hon'ble Chairman (Dr.) Gurpreet Singh. He explained the true meaning of Deepawali festival and shared the traditional Indian way to celebrate this festival with the lighting of the "Mati ke Diyas". He mentioned that it is one of the biggest festivals in India. He also explained the current way to celebrate this festival by doing shopping beautiful lights and decoration, food, fun and games etc. But, while wishing to all the best wishes about this Deepawali festival he conveyed a message to all that "This Diwali only Deepawali!"
Apart from this, the core concern of this “Deepawali fair” was to promote new initiatives and creativities of the students in Indian way. Huge Number of students from various institutions of UGI offered a variety of apparel, jewellery, home decor, handmade divas, greeting cards, cosmetics, paper bags, bags and many other lifestyle products on their stalls. Tambola and Musical chairs was also organised for students and faculty. Students and faculty members of all colleges under one roof also served delicacies such as kebabs, rolls, freshly baked pizzas, Indian street food and many more. At the end, a cultural programme was organised.

In addition, approximately five hundred students from twenty nearby government and private schools visited this "Universal Deepawali fair-2018". This fair reached at its climax during the cultural events of singing, dancing and performing visual arts. Around fifty students from Universal Group of Institutions as well as from the visiting schools gave their performance on "Jhalak-Dikhlaja Stage". Finally, three best stalls were selected out of thirty eight stalls installed in the ground of campus. Universal Group of Institutions, Lalru wished a very prosperous and happy Deepawali to all.