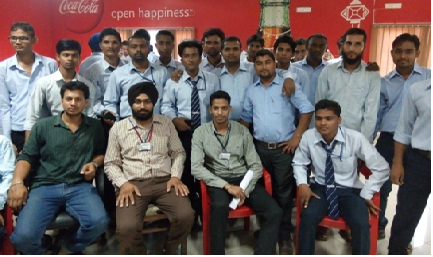 Kandhari Beverages - Coca-Cola Bottling Plant (KBPL) is the approved franchisee bottler for Coca Cola India to bottle various soft soft drink brands owned by CCI (Coca Cola India), with the major ones being Coke, Thums Up, Maaza, Limca and Sprite. The products are sold in two packing media, glass bottles and polyethylene terephthalate (PET) bottles of sizes between 300 ml and 2.5litres. The company is fully owned by Kandhari family who has long experience in the bottling business.

We all went to coca-cola plant by college bus. It was located in Village Sadhugarh, Post Sarhind, Fatehgarh Sahib, Punjab. We started at 9:45 am from college and reached the plant by 11:30am. The group was taken to the training hall, where an arrangement of refreshment was done for the students. In industry premises Mr. Luv Sharma and his colleague took us to the plant at 12:00 noon started up with the introduction about the plant and then the number of production lines. The beverages they produce are Thumbs Up, Maaza, Sprite, Fanta, Coke and Kinley. There is a separate production line for Water, beverages and mazza.

Mr. Luv told us about every activities happening in the plant like washing of bottles, filling, capping, labeling and packaging. He cleared student’s doubts which they had on marketing and manufacturing. He gave in and out about the plant. The plant is fully automated. Students were amazed at the speed at which the process occurred and how the automated systems could work according to the requirements. The manufacturing process adopted by them is batch process. The visit got over at 2:00 pm. And we reached at college on 04:15 pm.

This industrial visit to Coca-cola was an enriching experience for students in getting live exposure in manufacturing which can help them in their internship and further career enhancement. This visit gave students an opportunity to connect with the product, which they all consume. Students got an understanding of the various processes undertaken while being guided through a perfect interactive tour by company employees. The students were impressed with the process execution in the plant & by the efficient, smooth running systems.

Students were asked to submit individual report of industrial visit in the department.